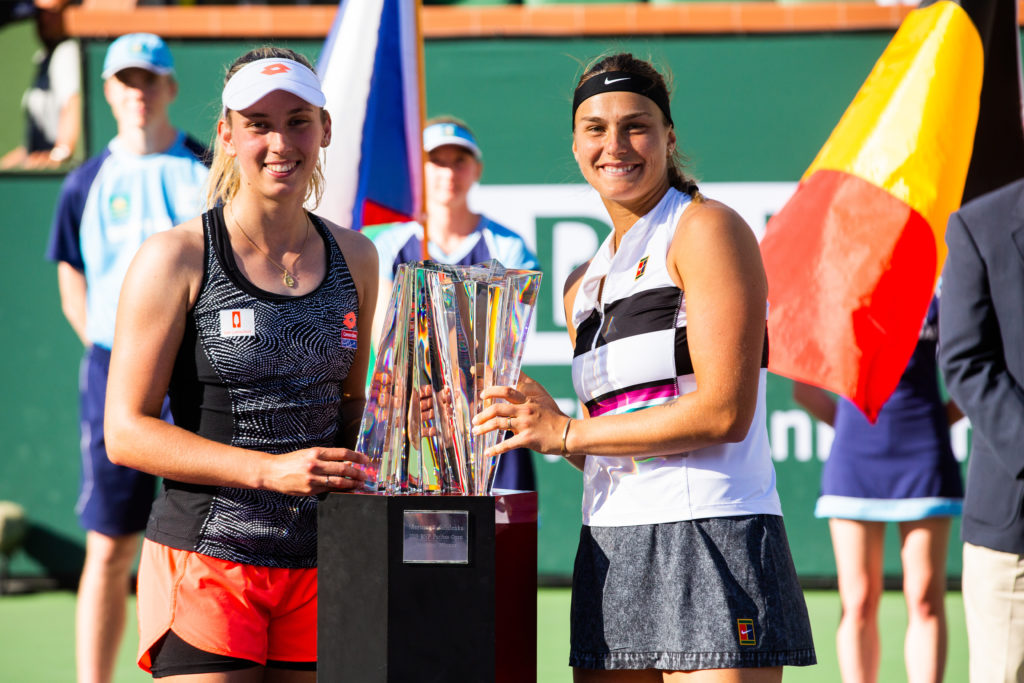 The newly minted pairing put on a masterful performance to upend the world No. 1’s

On a picturesque Saturday afternoon in Tennis Paradise, the BNP Paribas Open crowned its first 2019 champions. A highly-anticipated matchup of two doubles teams operating at an elite level entertained the fans in Stadium 1; with world No. 1 Czechs Barbora Krejcikova and Katerina Siniakova taking on singles experts Elise Mertens and Aryna Sabalenka.

After just over an hour of match time, Mertens and Sabalenka seized the title in a thorough 6-3, 6-2 triumph. With a surprising level of ease, the newly formed doubles team (who competed in their first tournament at January’s Australian Open) dispatched Krejcikova and Siniakova with a mix of clever shot selection and overpowering service games.

Break point opportunities told the story of the match on both sides, as Mertens and Sabalenka seized their chances while keeping the Czechs at bay. The unseeded pair won an impeccable (4/4) 100% of their break points, while saving (6/7) 86% of Krejcikova and Siniakova’s opportunities.

It was a disappointing result for the world No. 1’s and three-time Grand Slam Champions, as they were unable to develop any momentum throughout the match. After navigating a difficult patch of challengers on their road to the final, neither Krejcikova nor Siniakova could channel the same championship mettle that helped them overcome multiple match point deficits in earlier rounds. Regardless of Saturday’s result, the Czechs will certainly be back and ready to contend again in no time.

For Mertens and Sabalenka, the newly formed pairing exceeded everyone’s expectations for the week, including their own. “This is a result we barely could have dreamed of, but achieving it is truly something else,” Mertens explained in her post-match interview. “This is a great event that I’ve always loved, and hopefully we can come back for many years to come.”

Following victories over two of the tournament’s top-5 seeds to reach the final, Mertens and Sabalenka capped a thrilling run in the desert with Saturday’s straight-set victory.

After claiming the 2019 BNP Paribas Open Doubles Championship, it’s safe to say that a new pair of contenders has officially arrived on the doubles scene. Women’s Doubles Final
World No. 1’s Take on Singles Specialists in the Desert

Krejcikova/Siniakova Take on Mertens/Sabalenka for the Title The 2019 BNP Paribas Open women’s doubles final is set, and will feature […] 1. Bank of the West Day: You’ll be hydrated all the way through the BNP Paribas Open Championship weekend thanks to […]