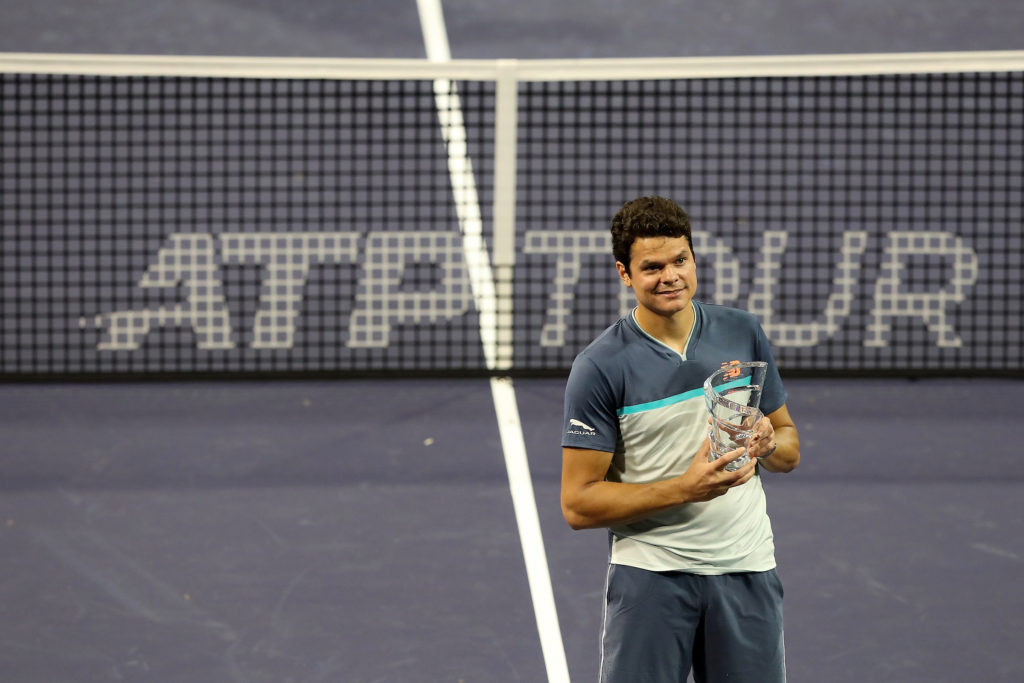 Tuesday, March 5, 2019 - Milos Raonic poses with the trophy after winning the Eisenhower Cup Presented By Masimo at the BNP Paribas Open in Stadium 2 at the Indian Wells Tennis Garden in Indian Wells, California.(Michael Cummo/BNP Paribas Open)

That’s how the Eisenhower Cup presented by Masimo kicked off on a slightly rain-delayed Tuesday evening at Stadium 2. From rock, paper, scissors to decide who serves first to on-court warm-up bikes to, of course, a single match tiebreak to decide a winner – the Tie Break Tens format is a colorful departure from a regular exhibition.

For the first time, the competition touches down in the Coachella Valley with a winner-take-all $150,000 prize. With ticket sales from the star-studded “Rafa & Friends” event going directly to charitable causes, it was a must-see for eager fans at the Indian Wells Tennis Garden.

David Goffin and Marin Cilic kicked off the night in a compelling clash of styles. An immediate mini-break of serve went the way of the Belgian, who quickly shot out to a seemingly unassailable 7-2 lead. But such is the nature of the format – Cilic was able to reel Goffin back in, ultimately saving three match points with some sturdy play from the baseline before claiming victory.

Missile-serving Canadian Milos Raonic was a victor over tennis’ finest showman Gael Monfils in the night’s second match. In complete control from the very first point (donated to him on a Monfils double fault), Raonic used his booming serve and silky touch at the net to keep his nose in front despite intermittent errors off his forehand. With the Frenchman unable to dazzle due to the quick pace of points, it was Canada’s No. 1 who advanced to the semis to face Cilic.

A matchup of two of the game’s most scintillating one-handed backhands came to a head in the third match of the night. Wawrinka, a three-time Grand Slam champion, out-played his erratic Austrian opponent, opening the court with ease and crushing winners into the open space. On one last Thiem ball long, Wawrinka advanced to the semifinals to await the winner of Rafael Nadal or Taylor Fritz.

Rafa isn’t always nice to his friends! The final match of the opening round saw SoCal’s own Taylor Fritz race off to an early lead – even getting as far as 7-5 in the score – before the legendary Spaniard put his foot on the gas to win five of the last six points. 21-year-old Fritz played courageously, but the Rafa show was always destined to make it through on under the lights in Stadium 2.

Raonic’s rock-solid form from his first match rolled on over into his semifinal against Cilic. He was impressive from the get-go, striking a walloping inside-in forehand winner to move up 4-1 and from there it as no looking back for the Canadian. A few unreturned serves and a fancy final point at the net later, the match was Raonic’s, putting him within touching distance – a final match tiebreak – of the $150K prize.

The best match of the night belonged to Wawrinka and Nadal, two multiple Grand Slam champs going head-to-head in front of a packed house for a spot in the Eisenhower Cup final. The mutual intensity was noticeable from the start, with both putting all their force into each shot. With the margins as thin as paper, an epic point at 8-7 saw Nadal draw even with Wawrinka as a pivotal forehand sailed just wide. Wawrinka would save one match point at 9-10 before securing victory after 15 thrilling minutes of quality tennis.

There’s a reason Raonic is known for his serve. Unreturned serve after unreturned serve left the Canadian’s racquet as he forced his way into a lead against relentless pressure off the ground from Wawrinka. Out-dueling the Swiss on crucial points from the back of the court would ultimately be the decisive factor for Raonic, as one final forehand winner flew past Wawrinka to secure the championship.