Defending champion Roger Federer will play for a record sixth BNP Paribas Open title on Sunday after turning back an inspired upset bid from 21-year-old Borna Coric to score a 5-7, 6-4, 6-4 victory.

Down a set and a break at 7-5, 4-2, the 36-year-old Swiss roared back in dramatic fashion to advance, and will now face Juan Martin del Potro in Sunday’s final.

The tricenarian is off to the best start of his career at 17-0, having eclipsed his opening run of 2006, a year that saw the Swiss finish at 92-5. He is into the final in Indian Wells for the fourth straight time, having missed the event in 2016.

“I had to fight a little bit just to keep the ball in play,” said Federer. “I tried not to do too much shot-making because it was difficult in the wind and Borna was incredibly steady. He was playing deep, with hard shots. It was tough to do anything. When he was up a set and a break, it was tough for me to accept and move on and just be happy to stay in the game, stay in the rallies with nothing fancy and maybe he would get a little nervous, and I think that’s exactly what happened. I got a little bit lucky, too.”

The first break-point opportunity of the match didn’t surface until the 11th game of the opening set. Federer would fight off the first serving at 5-all, 30-40 with a 127 mph serve out wide, but his opponent made good on the second when Federer netted a forehand volley. Until then, the Swiss hadn’t dropped a set in reaching his 11th semifinal in 17 appearances.

A zoning Coric didn’t take his foot off the proverbial pedal, opening the second set with another break, a crosscourt forehand with Federer serving at 30-40 giving him the early 1-0 edge. Facing a triple break point at 2-1, the former #NextGen poster boy erased all three chances, five unanswered points giving him the clutch hold. However, with a partisan Stadium 1 lifting him, Federer would bring the set back on serve four games later with his first break of the afternoon (he was 5-for-11 overall).

It was the just spark he so desperately needed. Down 7-5, 4-2, the five-time champion would send the match to a third set. Prior to the match, Federer said it would be interesting to see what kind of role the elements would play. In unseasonably cool conditions, he asked, would his opponent be the wind or Borna Coric? In the end, it was the veteran who handled the on-court breezes the best. When it really counted, it was vintage Federer. They would twice trade breaks in the final set, but Federer would reel off the final 11 points of the match to break Coric at love.

Coric, appearing in his first-ever ATP World Tour Masters 1000 semifinal, will jump from No. 49 to No. 36 with the final-four result. He’s the first unseeded semifinalist since Del Potro in 2011 and the first Croat in the semis since Federer’s coach, Ivan Ljubicic in 2010.

Del Potro didn’t have to work quite as hard as Federer in his semifinal against Milos Raonic, rolling past the Canadian in straight sets, 6-2, 6-3, in just over an hour for his 400th career win. The 6-foot-6 Argentine returns to the BNP Paribas Open final for the first time since 2013, when he fell to Rafael Nadal in the title match, 4-6, 6-3, 6-4. He is seeking his first ATP World Tour Masters 1000 title.

Facing one of the tour’s most powerful servers in Raonic, it was del Potro who would have the best day from the service stripe. The 29-year-old would win 24-of-27 (89 percent) of his first-serve points, and never faced a break point. But it was his return game that del Potro says made the difference.

“I think I was lucky in both sets. Milos has a great serve,” said del Potro, who moved ahead in both sets with early breaks. “But I was very focused on my return game. I broke many times [4-of-5], and that was the key of the match.”

In Federer, del Potro faces an opponent he is more than familiar with, and one to which he shows the utmost respect. It was the Swiss whom del Potro would shock in in five sets in the 2009 US Open final. He again topped Federer at the US Open last year in the quarterfinals, 7-5, 3-6, 7-6(8), 6-4, but trails by a wide margin in FedEx ATP Head2Heads, 6-18.

“Roger is the favorite to win,” he said. “I would love to repeat my win from the US Open 10 years ago. But it means a lot play against Roger. He’s a friend of mine. I admire him a lot. He shows the greatest sportsmanship on tour. It’s an honor for me to play a final against him.” During his charge to the Australian Open title in January, when he would capture his historic 20th major title, Roger […] 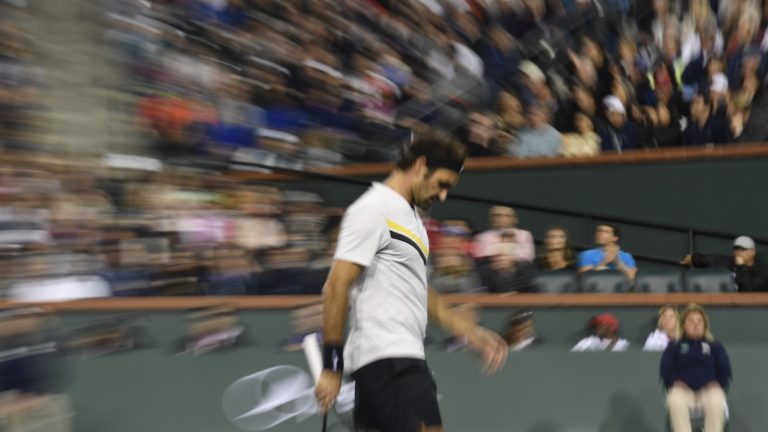