It wasn’t that they weren’t glad to see her. But when Elena Vesnina walked into the players locker room at the Indian Wells Tennis Garden for the first time this week, she received an interesting reception.

And that that was before her larger-than-life-sized mural was unveiled. But as the defending BNP Paribas singles champion, Vesnina’s image is dotted throughout the grounds and the 31-year-old Russian is enjoying every minute of it, taking a selfie with the tournament trophy at Monday’s women’s draw ceremony and reveling in a victory that ranks high among career highlights that include four Grand Slam doubles and mixed doubles titles, and an Olympic gold medal in Rio.

“I can believe it was one year ago,” she said, “but I still have these feelings and memories like it just happened yesterday.”

The former sports psychology major eliminated Angelique Kerber and Venus Williams en route to defeating Svetlana Kuznetsova in a three-set final that went down as one of the top battles of 2017. Throw in that Vesnina won the tournament a year after being eliminated in the first round of qualifying, and that the title moved her up to a career-high ranking of No. 13, and it wasn’t surprising to see her cozy up to the crystal trophy Monday.

Entered as well in the doubles draw with longtime partner Ekaterina Makarova, the $1 million bonus promised to the player who wins both singles and doubles here, is not so far-fetched.

“Whoa, no pressure there,” Vesnina laughed.

But Vesnina, making her 10th appearance here, admitted winning in doubles has given her added confidence. “When you’re winning Grand Slam titles and an Olympic gold medal, it means you’re a good player and it means you can do well in singles as well,” she said.

For at least one former top 10 player, however, Vesnina doesn’t need to prop herself up with doubles.

“It wasn’t that huge of a surprise for us [when she won here last year]. When you play her and when she’s on, you feel how good she can play. When she strings it together over a fortnight and beats all these players, it’s a little surprising, but her level of play was not surprising.”

Though Vesnina failed to advance beyond the third round of a singles event since then, she has also been buoyed, she said, by the addition of Dmitry Tursunov, once ranked No. 20 on the ATP Tour, as her coach.

“I’m really happy to have him on my team,” said Vesnina, who has a first-round bye and will open against the winner of young American CiCi Bellis and an as-yet-undetermined qualifier. “He helps me lot with the physical stuff, the technical stuff, my serve. He’s an amazing player who knows how to play tennis and he can bring [to me] what helped him.”

As for finding balance in a life that includes her husband of two years, it does not appear to be much of a challenge.

“I just find inspiration in every single day,” Vesnina said. “I’m happy to play tennis, happy to travel around the world. I just feel grateful to be here and have my job as my favorite thing to do.” 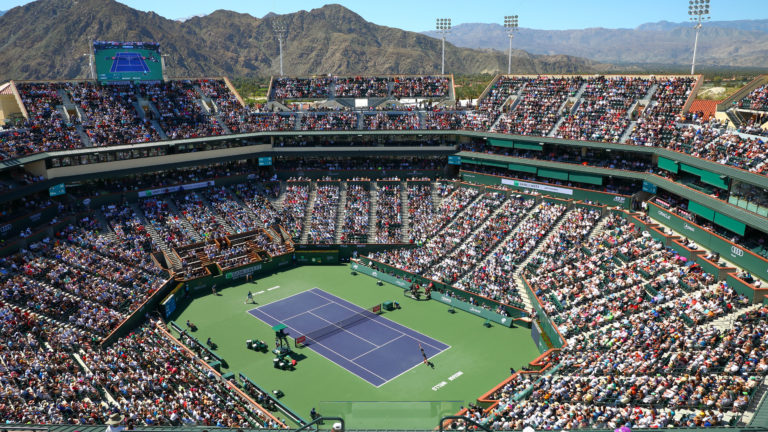 10 Indian Wells Matches for the Ages

As tennis fans gear up for the 2018 BNP Paribas Open, we look back on 10 indelible moments in Indian […]